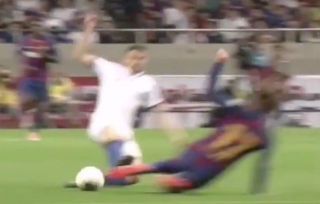 Barcelona suffered a defeat to Chelsea in their pre-season clash on Tuesday, while Antoine Griezmann picked up a knock on his debut for the Catalan giants.

As noted by BBC Sport, the 28-year-old joined from rivals Atletico Madrid in a deal worth €120m earlier this month, as he looks to slot into the Barca XI ahead of the new campaign and help them secure more major trophies moving forward.

This summer will be all about settling in and adapting for the Frenchman, and there were certainly some promising early signs against Chelsea, albeit he only featured for the opening 45 minutes.

There was some concern though after he needed treatment following a hard tackle from Jorginho, as seen in the video below, as the last thing that all concerned at the Nou Camp would have wanted was to see Griezmann forced off early in his first appearance for the club.

However, he provided an update on his status after the game, and while he conceded that he certainly felt the blow, he expects to be fine for the next outing having been able to carry on after the challenge.

“It hurt a bit when it happened, and I’m sure [it’ll hurt] more tomorrow,” he is quoted as saying by AS. “But I’ll be fine for the next game. It was a nasty challenge, but at the end of the day that’s football.”

Barcelona take on Vissel Kobe on Saturday morning, while they also face Arsenal and Napoli before the La Liga campaign gets underway.

With the new season fast approaching, they’ll be relieved that Griezmann hasn’t suffered an injury setback, although a decision will likely be taken on whether or not to risk him at the weekend.

So minutes into Griezman’s debut for Barcelona Jorginho has absolutely crunched him. Love to see it ?? pic.twitter.com/xGaFHr3xBT