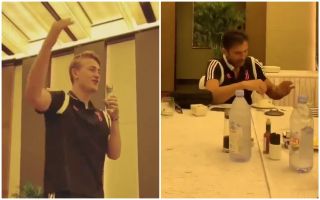 Matthijs de Ligt overcame some early nerves to get his Juventus teammates going with his rendition of Bob Marley’s ‘Three Little Birds’ classic as his initiation song.

The Dutchman completed his move to Turin from Ajax earlier this month, and he has settled in well on their pre-season tour as he looks to play a key role in Maurizio Sarri’s side this season.

As is the norm for players these days, he had to endear himself to his new teammates by singing an initiation song, and he played it safe with a classic as he went for an iconic Marley track.

He would have had plenty of practice as it has been heard at his former club Ajax on a number of occasions inside the stadium and from their fans when travelling to away games, and judging from the reaction of the Juventus squad in the video below, he’s passed with flying colours.

De Ligt even managed to get veteran Gianluigi Buffon tapping away on the table as the reigning Serie A champions look to continue to dominate domestically this coming campaign while also making a big impression in Europe.