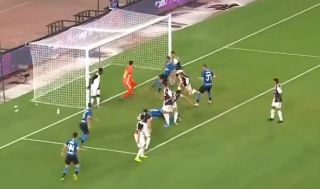 Matthijs de Ligt has not got off to the best of starts at Juventus, suffering a friendly defeat to a Harry Kane-inspired Tottenham the other day, and now putting through his own net against Inter Milan.

The teenager is one of the biggest prospects in world football and shone for Ajax last season to earn himself a big transfer to Juventus this summer.

De Ligt own goal lmaooo, what a massive fraud man, Rugani will soon bench him. pic.twitter.com/Fa0DvqmNbe

You can see the De Ligt own goal video above, with the Dutchman sticking a leg out and diverting past his own goalkeeper, who immediately puts an arm around him to comfort him.

Perhaps predictably in the social media age, this has now sparked some reactions from the very worst Manchester United fans on the internet.

You will no doubt be aware of De Ligt being linked with the Red Devils by BBC Sport and others, and some of their supporters are relishing seeing the player they missed out on doing so badly.

They’re presumably looking forward to another season of Chris Smalling and Phil Jones, then…

Hahaha de Ligt scored an own goal. Hopefully many more to come

Lmao we really dodged a bullet, De Ligt out here scoring own goals ?