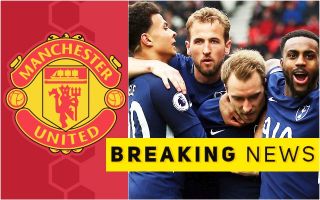 Tottenham are reportedly willing to sell Christian Eriksen to Manchester United this summer as they plan to rebuild their squad.

The Denmark international has been a world class performer for Spurs down the years, but has run his contract down to its final year to attract plenty of interest from top clubs this summer.

While this looks a potentially huge loss for Tottenham, it seems they’re prepared for his departure, if the latest update on his future is anything to go by.

According to the Daily Mail, Eriksen has an asking price of around £70million, with club chiefs and the player’s representatives both made aware of interest from Man Utd.

The report notes that the Red Devils have been linked with similar players such as Sergej Milinkovic-Savic, while Eriksen has also been linked as a target for La Liga trio Real Madrid, Barcelona and Atletico Madrid, though these clubs no longer seem in the running.

Christian Eriksen could be allowed a transfer to Manchester United

Still, the 27-year-old would be a fine statement purchase for MUFC if they can pull it off, with the club in need of more spark and creativity in the final third.

The Mail suggest the deal could well be on the cards as THFC perhaps sensibly seem prepared to cash in on the player who would be a free agent in a year’s time.

The report claims they could rebuild Mauricio Pochettino’s squad with the signing of Real Betis attacking midfielder Giovani Lo Celso, which may then pave the way for Eriksen to move to Old Trafford.