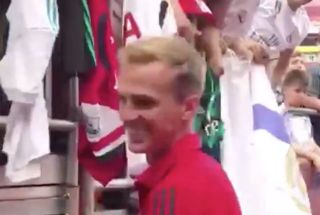 Arsenal took on Real Madrid in their latest pre-season friendly on Tuesday, and Rob Holding showed he was alert even before kick-off.

The Gunners will be hoping to secure a morale boosting result as their preparations continue for the new campaign, with Unai Emery desperate to ensure that they enjoy a more successful season than his first in charge after they failed to secure a return to the Champions League.

However, for now, it will be about improving fitness levels and ensuring that the players are ready to make a positive start when they take on Newcastle United on August 11.

For Holding though, he was tested before a ball was even kicked as seen in the video below, as while he was innocently signing shirts in the crowd ahead of kick-off, he was almost caught out by a Tottenham fan who wanted his Heung-Min Son shirt signed.

Fortunately for the Arsenal defender, he spotted it just in time and quickly walked away with a wry smile on his face.

Judging from the reaction from the Gunners fans below, they were certainly delighted with his eventual response and were full of praise for him as signing a Tottenham shirt wouldn’t have been a great look for him.

LMAOOOOOO captain him right now, he should of spit on it

Just give him the armband.

GIVE THAT MAN A LIFETIME CONTRACT

Give him the Armband 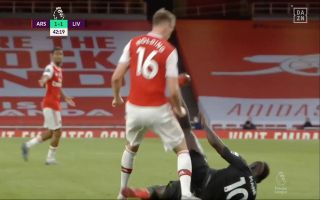