PSG possess the dangerous combination of being petty but also unbelievably rich. It was believed they signed Neymar as a furious reaction to Barcelona’s interest in Marco Verratti. Now that Barca want to bring Neymar back, reports have emerged that PSG plan to react in a similar way.

According to a report in Donbalon, PSG’s plan to get back at Barca is to sign Sergio Busquets.

On first look it does seem a ridiculous suggestion, however when you consider Barca have Frenkie De Jong, Arthur and Oriol Busquets pushing for a first team place, then it could make sense to let Busquets move to Paris.

The French champions have always struggled to find someone to successfully anchor their midfield and there’s no doubt the Barca star would be able to do that.

If they were able to get Busquets then their problem position would be immediately fixed, it could even be enough to allow them to make a serious run at the Champions League. 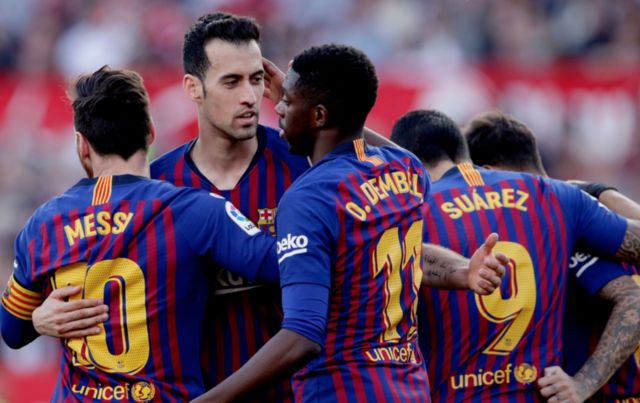 Busquets celebrates with his Barca teammates

There is no suggestion of a fee at this point and it would be remarkable to see Barca willingly sell to PSG. When Busquets signed a new contract Reuters reported that it contained a £444m release clause so a fee would need to be agreed.

Since breaking through in 2008, he has gone on to play over 500 games for the Catalan giants winning 29 major club trophies alongside a World Cup and European Championship winners medal for Spain.