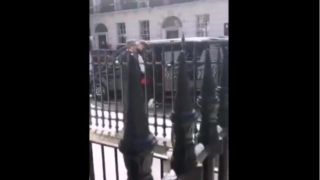 William Saliba appears to have been spotted arriving in London to finalise his transfer to Arsenal from Saint-Etienne.

As has been widely reported, the 18-year-old defender is set to join the Gunners for around £25million before returning to Ligue 1 on loan for the season ahead.

Saliba will then link up with Arsenal next season in what looks an exciting move for the north London giants.

Tottenham had also been linked with the young Frenchman, who looks one of the most exciting defensive prospects in Europe.

The video above seems to be genuine footage of someone who looks a lot like Saliba getting out of a car somewhere in London, so Gooners won’t have to wait for too long now for this to become official.