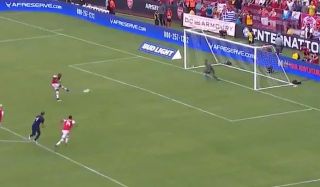 Real Madrid endured a nightmare start to their pre-season friendly clash with Arsenal on Tuesday as they fell behind and were reduced to 10 men after just 10 minutes.

Nacho was given his marching orders as he handled on the line to prevent a certain goal, and that gave the Gunners the opportunity to break the deadlock from the penalty spot.

SEE MORE: ‘Just give him the armband’ – These Arsenal fans love what Rob Holding did as Spurs fan almost catches him out

Lacazette was rather fortunate though, as his effort from the spot-kick hit both posts as it eventually made its way over the line, and the Frenchman certainly looked relieved after as he shared a joke with his teammates.

It’s undoubtedly a great run-out for Arsenal against the Spanish giants, and they couldn’t have asked for a better start with the opening goal as well as now having the man advantage for the remainder of the encounter.

In contrast, Real Madrid will have it all to do to stay in the game, as things got even worse for them shortly after as Pierre-Emerick Aubameyang doubled Arsenal’s lead.