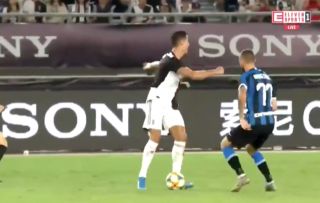 Cristiano Ronaldo may not be the notorious dribbler he once was, however that doesn’t mean that the Juventus superstar can’t still pull off one or two tricks from time to time.

During his early days at Real Madrid, and entire spell at Man United, the forward was known for pulling off dazzling tricks and skills that were very pleasing to the eye.

However, in recent years, Ronaldo has somewhat ditched this style of play in order to focus on his goalscoring, although this doesn’t mean he can’t pull something out of the bag every now and again.

As seen above, Ronaldo pulled off a very tasty skilled no-look pass against Inter Milan today, showing that he still very much has the ability to do this kind of stuff in his locker!