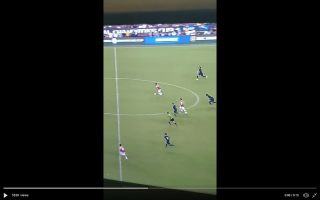 Marcelo showed that he’s getting back to his best for Real Madrid in the early hours of the morning, the superstar was sensational for Los Blancos in their International Champions Cup tie against Arsenal.

After Madrid lost the ball in the final third of the pitch, a promising counter-attack was launched for Arsenal, fortunately Marcelo shut down the Gunners’ chances of scoring by sprinting down half of the pitch to tackle Reiss Nelson.

Marcelo made the recovery tackle look effortless. The 31-year-old became a prime target of fan criticism last season after his disappointing performances for Los Blancos.

Marcelo was awarded the Man of the Match award for his sensational performance after Madrid triumphed over Arsenal on penalties.

Take a look at Marcelo’s impressive recovery below:

Marcelo tracking back like his life depends on it, retweet for good luck pic.twitter.com/Ysw70azBKt

Here’s some reaction to the Brazilian’s surprisingly impressive performance:

Marcelo is that you?

Marcelo isn’t messing around. Looks like Mendy’s arrival has got him super focused and motivated to get his LB spot back after being benched by Reguilon last season.

marcelo came on and fucked us… best left back of the decade for sure.

Getting Marcelo back was one of the main purposes of Zidane and today he is proving he is not over yet. 2-2 Asensio goal.

Marcelo is the best Left back in the world

Marcelo has changed the game completely. I’m starting to see the Marcelo of old. The smile is back ?

Madrid fans are excited to see that the Marcelo of old is back, there’s no doubting that the attacking full-back is one of – if not the best left-back of the last decade.

It appears that Marcelo isn’t going to give up his starting spot at left-back to marquee summer signing Ferland Mendy without a fight, Zinedine Zidane could have a tough choice on his hands next season.