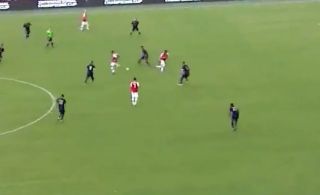 Arsenal duo Alexandre Lacazette and Pierre-Emerick Aubameyang proved to be a dangerous pair last season, and they’re showing in pre-season that they will continue to be so.

The Frenchman had given the Gunners an early lead in their pre-season friendly against Real Madrid on Tuesday, as he scored from the penalty spot after 10 minutes after Nacho was given a straight red card after handling on the line.

SEE MORE: ‘Just give him the armband’ – These Arsenal fans love what Rob Holding did as Spurs fan almost catches him out

However, he turned provider shortly after as seen in the video below, as he produced a deft yet brilliant little flick to set Aubameyang clear through in behind the Madrid defence.

The prolific striker did the rest as he kept his cool to round Keylor Navas before producing a tidy finish despite the best efforts of Sergio Ramos to deny him.

Scoring goals wasn’t the problem for Arsenal last season as it was their defence which was the biggest liability in the team, having conceded 51 goals in just 38 Premier League games which was the second worst defensive record of the top nine sides.

Judging from the early signs in this outing though, it appears as though their feared attacking duo are ready to lead their charge again this coming campaign as they linked up superbly to find another breakthrough and Unai Emery will be delighted to see the quality on display up top.

Great little flick by Lacazette, plays it into Aubameyang who makes it 2-0.