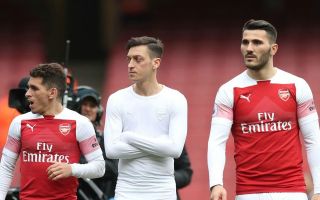 It’s Arsenal fans and it’s Twitter, so predictably there’s some interesting reaction to this whole incident between Mesut Ozil, Sead Kolasinac and a gang of knife-wielding criminals.

A video has been circulating online of Ozil being attacked by the group of thugs, with Kolasinac also seen fighting them off bare-handed.

The Daily Mail have also reported on the incident, and it’s got Gooners changing their mind about Kolasinac in a big way.

The Bosnian hasn’t exactly set the world alight during his time at the Emirates Stadium, but his brave defending of Ozil has earned him some new-found respect.

And while the Daily Record and others have several times linked Celtic left-back Kieran Tierney with Arsenal this summer, loads of Gooners are now saying they need to keep Kolasinac instead.

We’re not sure fighting off criminals necessarily makes the former Schalke man a better footballer, but it’s easy to see why Gunners supporters now feel a stronger affection towards him for his bravery.

Bin Tierney off for Kolasinac imvho

Video of Seo Kolasinac fighting off two men with knives, after they tried to rob Mesut Özil. What an animal. My defender. pic.twitter.com/sZUKJKxBLU

Cancel Tierney tbh, Kolasinac can keep his spot. Too alpha to be scared of a little knife.

Kolasinac is a fucking animal

Need to keep him around just for fights https://t.co/bLCRmXYc7x

Would actually keep Kolasinac purely because of that. https://t.co/ZiMk7mHA4L

Here what a guy! Cancel that tierney deal arsenal have there hero ??