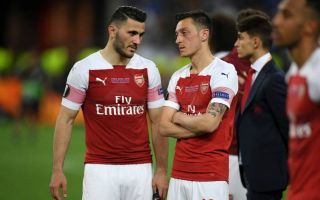 Arsenal left-back Sead Kolasinac responded to today’s incident involving him and Mesut Ozil in hilarious style, but has since deleted his tweet.

See the screen-grab below from Twitter account AFC Stuff, which shows the Gunners defender simply tweeting an emoji of a fist, presumably in reference to his fighting off a knife-wielding gang earlier today.

Image: Sead Kolasinac tweeted, “??”, which has since been deleted. #afc pic.twitter.com/FDCfDDmRpd

MORE: Loads of Arsenal fans are saying the same thing after Kolasinac protects Ozil from gang

The whole saga was reported by the Daily Mail, with Kolasinac and Arsenal team-mate Ozil attacked whilst driving in the German playmaker’s car in north London.

Despite the criminals being armed, video footage has shown Kolasinac taking them on by himself, and perhaps he felt pretty good about his act of bravery.

However, the 26-year-old has since deleted the tweet, which is a shame because it was pretty funny!

Lol Kola fights off two blokes with knives and then tweets this as if he’s just won a big fluffy toy at Winter Wonderland pic.twitter.com/78wLpT957K

Away from that, Sky Sports have reported that thankfully both players were unharmed in the attack and their pre-season preparations should not be affected.

Arsenal fans and indeed neutrals will just be grateful both players are fine following their involvement in a clearly dangerous situation.