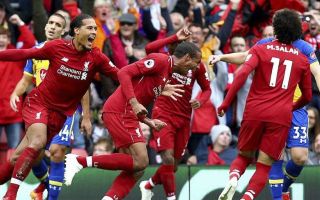 Liverpool centre-back Joel Matip has said that the club’s tour of USA was important to enhance the fitness of the squad.

After convincing wins over Tranmere Rovers and Bradford City, Jurgen Klopp’s men traveled to the US to play three matches. The Reds lost 3-2 to Borussia Dortmund in Indiana before losing 2-1 to Sevilla in Boston.

Liverpool’s final game on their tour ended in a 2-2 draw against Sporting. The Portuguese club started brilliantly with star player Bruno Fernandes putting them ahead after only four minutes.

The Champions League winners responded well and Divock Origi equalised in the 20th minute before Gini Wijnaldum put Liverpool ahead in the 44th minute. However, Sporting found an equaliser courtesy of Wendel.

Despite Liverpool leaving the US without a win, Matip feels that the tour was necessary from a fitness standpoint. The Cameroonian centre-back told Liverpool’s official website: “It was an intense period with good opponents and we worked hard to get a better fitness level and to get back in the mood. We still have a lot of work to do and we are working hard. I’m looking forward and we are confident.

“We know it’s a long way to go and we still have a lot to improve, but we’re in a good way.”

Liverpool’s final two pre-season matches are against Napoli in Edinburgh and Lyon in Geneva. After this, the Reds will make an attempt to win their second trophy under Jurgen Klopp when they lock horns with Manchester City in the Community Shield.