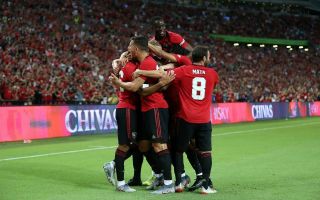 Most Manchester United fans are now more eager than ever for their club to dip into the transfer market for a new centre-back before the end of the summer.

The Red Devils have just beaten Tottenham 2-1 in a pre-season friendly, but lost Eric Bailly to what could be a bad injury after some rash play by the defender.

The Ivory Coast international notably went off on a stretcher and this tweet below from Rob Dawson also shows he was on crutches afterwards.

Eric Bailly leaving the stadium on crutches with his left knee in a brace. Doesn’t look good. pic.twitter.com/HwBhvhoLXA

Bailly didn’t exactly have the best time at Old Trafford last season either, and this may well signal the end of his United career.

MUFC have notably been linked strongly with a move for Leicester City centre-back Harry Maguire, and the Metro claim Bailly fears for his career if the England international does join.

Feel for Eric Bailly but was pessimistic about his chances this season with United looking to sign Maguire.

Rash as fuck and injury prone, but annoyingly I think there’s a good defender somewhere in him as he showed in 2016/17.

He is Phil Jones on speed.

Another defensive injury think it shows that Bailly not going to be a success at United.. definitely need to bring a CB in #mufc

There was a article prior to KO suggesting that Eric Bailly is worried about his future should we sign Harry Maguire… he’s just been stretchered which could well be the final nail in the coffin.

We’ve lost Bailly now looks like for some time- surely we gotta go back for Maguire!!