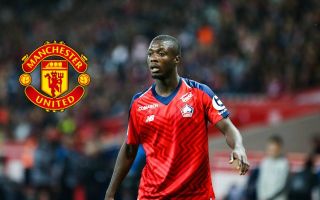 Manchester United are reportedly one of the clubs to be close to an agreement with Lille for the transfer of Nicolas Pepe for around £71.5million.

This is also the case for Serie A giants Napoli and Inter Milan, according to French source La Voix du Nord.

It remains to be seen where Pepe will end up next, but this is not the first time he’s been linked with Man Utd as his superb form last season has attracted plenty of rumoured interest in him this summer.

The Times had claimed United were joined by the likes of Liverpool and Arsenal as being interested in the Ivory Coast international, and that they’d even initiated some contact over the potential deal.

Lille star Nicolas Pepe could be on his way to Manchester United, Napoli or Inter Milan

If La Voix du Nord is anything to go by, it seems the Red Devils are now making progress on trying to bring Pepe to Old Trafford, which makes sense as he’d surely be a huge upgrade on under-performing attacking players like Alexis Sanchez and Romelu Lukaku.

The 24-year-old hit double figures for goals and assists last season, so MUFC fans will no doubt be hoping they can see off competition from other clubs to get this signing done.