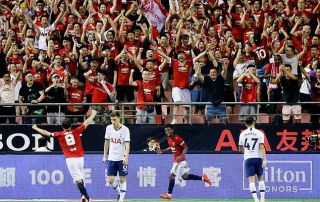 Manchester United continued their winning the run in their pre-season games as they beat Tottenham Hotspur 2-1 in Shanghai.

The Red Devils opened the scoring in the 21st minute after a brilliant through ball from Andreas Pereira found Anthony Martial who shot at the near post just past Spurs goalie Paulo Gazzaniga.

In the 65th minute, Lucas Moura created some shooting space for himself thanks to some terrific footwork and his shot was deflected into the back of the net.

United found their winner in the 81st minute after Angel Gomes brilliantly shot past Gazzaniga following a one-two with Juan Mata. This was the 18-year old’s first goal in a Man Utd shirt.

Ole Gunnar Solskjaer’s side secured their second win in as many matches at the International Champions Cup while last year’s winners Tottenham Hotspur failed to retain the prize.

Solskjaer will undoubtedly be very pleased with the Frenchman’s performance today. The 23-year old was brilliant at centre-forward, posing a constant attacking threat. He hit the post before opening the scoring in the 21st minute. United fans will now hope the inconsistent Martial can produce similar performances once the real football gets going.

A fine one-two with Juan Mata to set himself free on the left followed by a wonderful finish, Angel Gomes couldn’t have asked for a better goal to mark his first goal in a Manchester United shirt. Despite coming on in the 80th minute, the 18-year old attacking midfielder had a significant impact on the game as he scored the winner.

The Serbia international did not have the best of 45 minutes in Shanghai. All in all, Matic had a pretty quiet game and was not quick enough to stop Lucas Moura from drawing Spurs level in the 65th minute. Having also struggled for so much of last season, and with Ander Herrera now gone, this looks an area of real concern for MUFC as they surely need a new signing in midfield before the transfer deadline.

The 17-year old forward was terrific against Leeds United and Inter Milan, scoring a goal each in both games. Compared to those games, Greenwood was pretty underwhelming on the right wing. He couldn’t be the kind of attacking threat he was in the earlier matches.