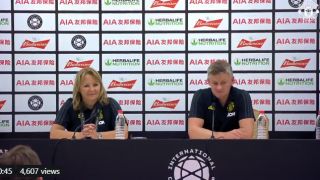 Manchester United manager Ole Gunnar Solskjaer responded to a question about Eric Bailly’s injury against Tottenham and whether or not that means his club will step up their pursuits of a centre-back transfer.

The Norwegian tactician gave little away with his answer, focusing instead on how well his current crop of defenders played in the friendly win over Tottenham.

Solskjær remains coy on #mufc's plan to sign a centre-back after Bailly's injury.

Shortly after the game, however, Sky Sports claimed Solskjaer had urged United chief Ed Woodward to sort out the signing of Leicester City defender Harry Maguire as soon as possible.

It remains to be seen if a deal can be done, but the MUFC manager clearly wasn’t too keen to openly discuss his side’s transfer plans, even if something else might well be going on behind the scenes.