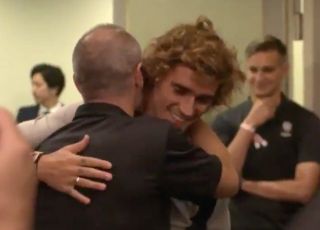 Barcelona were welcomed by some familiar faces in Japan this week as Andres Iniesta and David Villa were on hand to greet them.

The Catalan giants face Vissel Kobe on Saturday morning as part of their pre-season preparations, thus pitting them against their two former stars.

As always, the duo showed their class to give some of their former teammates and some new faces a warm welcome in the build up to that encounter, and as seen in the video below, it appeared as though Iniesta reserved a particularly warm embrace for new signings Frenkie de Jong and Antoine Griezmann.

There will no doubt be some advice passed on by the Barcelona icon, while the mere fact that he met up with the squad and shared some lovely moments with them had the fans below in a very emotional state, as seen in the tweets below.

Time will tell who comes out victorious at the weekend, but there’s no doubt that Iniesta still holds a special place in the hearts of Barcelona fans.

I miss this man soooo fu”king MUCH…

Lmaoooo why are tears coming out fgs? I freaking love this club man, I really can’t help it. ??????

Trying not to cry…

This made be cry and smile at the same time ???