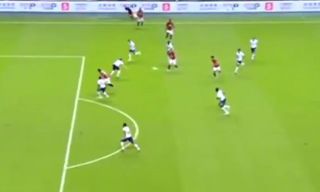 Man Utd took the lead against Tottenham in their pre-season friendly on Thursday thanks to Anthony Martial finding the back of the net.

The Red Devils will be looking to build momentum and confidence heading into the new campaign, and a win over their Premier League rivals would certainly help with that.

In turn, they will be delighted to have taken the lead, as seen in the video below, with Andreas Pereira playing a delightful through ball in behind the Spurs defence to set Martial free on goal.

The Frenchman managed to squeeze his effort home at the near post, and so Ole Gunnar Solskjaer will be pleased with what he’s seen in the move from the creativity to the finish.

Time will tell if United can protect that lead, but there are positive signs for them to build on as Spurs will undoubtedly look to hit back having named a strong side themselves.