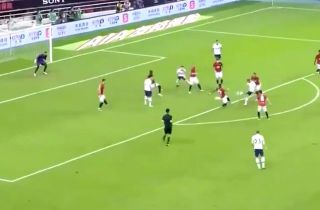 The Red Devils had taken the lead in the first half through Anthony Martial, but things became rather feisty and heated between the two Premier League rivals with some contentious incidents.

However, both managed to keep 11 players on the pitch, and after threatening to find a way back into the game, Spurs eventually got their reward with Moura showing great feet to open some space for himself before his effort took a big deflection to leave Romero beaten.

It may only be pre-season, but both sides will be desperate to secure a win to boost morale and confidence in order to head into the new campaign with some momentum.

Should neither find another goal though in the normal 90 minutes, it will be down to penalties to split them.

Lucas Moura equalises against Man United to make it 1-1 in Shanghai?? pic.twitter.com/wWuj7e7eh5