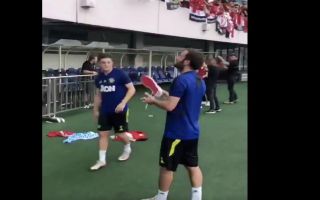 Manchester United midfielder Juan Mata made one lucky supporter’s day by signing his shoe at a training session in China.

The Red Devils are currently on tour for the International Champions Cup, with a fixture against Premier League rivals Tottenham up next on Thursday afternoon.

Ole Gunnar Solskjaer’s men have won all three of their pre-season games to date, against Perth Glory, Leeds and Inter Milan, with Mata playing a prominent role after signing a contract extension with the club back in June.

The Spaniard is now tied down at Old Trafford until 2021 and he remains a popular figure among the United faithful, including those in the far east.

One supporter reacted hilariously after Mata signed his shoe at an open training session on Wednesday, pumping his fists in joy and cheering as the midfielder walked away.

We think this fan was pretty happy to get his shoe signed by @JuanMata8!#MUFC #MUTOUR ?? #ICC2019 pic.twitter.com/K9XGocu5GP