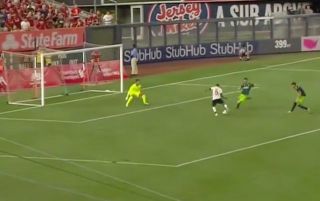 Liverpool continued their pre-season preparations on Wednesday as they were held to a 2-2 draw by Sporting Lisbon.

Goals from Divock Origi and Georginio Wijnaldum turned things around for the Reds after Bruno Fernandes had given the Portuguese giants an early lead, but Wendel struck in the second half to ensure that the spoils were shared.

Perhaps the pick of the highlights was Alex Oxlade-Chamberlain’s assist for Wijnaldum’s goal, as seen in the video below, as he produced an excellent through-ball with the outside of his foot, albeit he was given a helping hand by some poor defending too.

Nevertheless, Jurgen Klopp will be pleased with the latest run out as his side continue to step up their fitness levels and improve, as they will be hoping to build on last season and continue to compete for major honours in the upcoming campaign.

With tests like this they will feel as though they’re certainly moving in the right direction to be somewhere near their best when they open their Premier League campaign against Norwich City on August 9.

Before that though, they have two more friendlies against Napoli and Lyon before taking on Manchester City for the Community Shield on August 4.