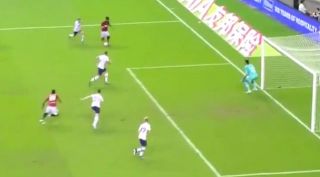 Man Utd responded well to Tottenham’s equaliser as youngster Angel Gomes put them back ahead in their pre-season clash in Shanghai on Thursday.

Anthony Martial’s opener had been cancelled out by Lucas Moura, but with just 10 minutes to go, Gomes stepped up and produced a moment of brilliance.

As seen in the video below, the 18-year-old played a brilliant one-two with Juan Mata to break free down the left flank, and he kept his composure to produce a superb finish too as United went ahead again.

From the build-up play to the tight angle to find a finish, it was an excellent all-round goal from the youngster, as he is one of many who have staked a claim for a bigger role under Ole Gunnar Solskjaer during the pre-season tour thus far.

Time will tell if the Man Utd boss is willing to give them more minutes, but if further reinforcements don’t arrive between now and the transfer deadline, he may have no other choice but to show faith in them.

Angel Gomes ? what a goal? pic.twitter.com/jaDCn9keWe