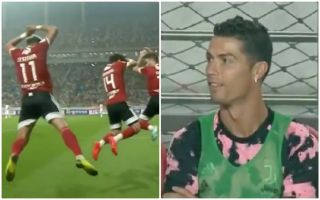 The K-League All Stars gave a great account of themselves in their clash with Juventus on Friday, and they even had time to rip off Cristiano Ronaldo’s celebration.

After a thrilling 90 minutes, the encounter ended in a 3-3 draw and although the Turin giants made a number of changes during the game, they named a strong line-up and squad.

In turn, the All Stars can be pleased with their effort and after Cesinha scored to make 2-1 in their favour just before half-time, they created another memorable moment.

As seen in the video below, Cesinha rounded up his teammates and they went on to produce the infamous ‘SIUUU’ Ronaldo celebration.

The camera then panned to the Portuguese superstar who was on the bench, and while he had a wry smile on his face at first, it’s fair to say that he didn’t look all that impressed.

Let’s hope that they haven’t infringed any copyright or trademark laws, but what a great moment in a thriller of a game…

Cesinha scores for the K League All Stars vs Ronaldo's Juventus…

Then the K League players do the SIUUUU Ronaldo celebration ??#CR7 pic.twitter.com/XSXIp6gOvc