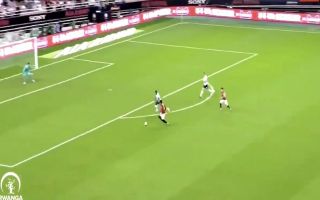 Manchester United attacker Anthony Martial smashed the ball against the woodwork after being set up by Daniel James against Tottenham.

The Red Devils beat their Premier League rivals 2-1 at the International Champions Cup on Thursday afternoon, with Martial and Angel Gomes grabbing the goals.

Welsh winger James produced another eye-catching display against Spurs, continuing his impressive form since moving to Old Trafford from Swansea in June.

Martial hit the post after great work from the 21-year-old with just three minutes on the clock, narrowly missing the chance to open the scoring.

James picked up the ball in the centre of the pitch before driving forward and laying the ball off for the Frenchman, who picked his spot brilliantly and was unlucky not to find the net.

Check out the superb link-up play between the two men below, via Twitter.