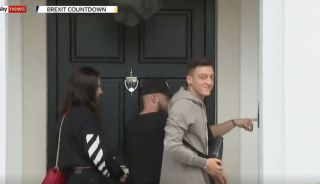 Arsenal and Germany midfielder Mesut Ozil has confirmed that he and his wife are “all good” after they were involved in an attempted carjacking yesterday.

According to the BBC, Ozil, and teammate Sead Kolasinac, were involved in an attempted carjacking yesterday, with both reportedly escaping the situation unharmed.

Özil telling Sky ‘he’s all good’ in front of his house today. Video via SkyNews pic.twitter.com/9yP0ya9sj1

And now, Ozil has reaffirmed this, by stating that he and his wife are both “all good” after being questioned by Sky News reporters this afternoon.

Great to hear that both the German and his wife are doing fine after what must’ve been a very scary scenario for them to be in!