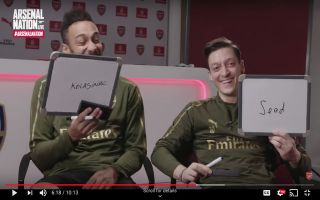 Arsenal superstar Mesut Ozil revealed that Sead Kolasinac would be the one Gunners star that he’d like on his side in a fight in a old video that has surfaced.

Mesut Ozil knew he could always count on Sead Kolasinac’s support long before the pair were targeted by armed thieves, a ‘Teammates special’ video that was published on Arsenal’s YouTube in February shows the attacking midfielder, and star striker Pierre-Emerick Aubameyang, revealing that Kolasinac is the one teammate that they’d like on their side in a fight/

According to the Daily Mail, the pair were together in north London before being attacked by armed thieves, the report highlights that the duo were in Ozil’s £100,000 Mercedes G-Wagon when the attack occurred.

Kolasinac showed immense bravery to challenge the armed thugs with his bare hands, the duo escaped to a nearby Turkish restaurant.

Check out the teammates special between Aubameyang and Mesut Ozil below: