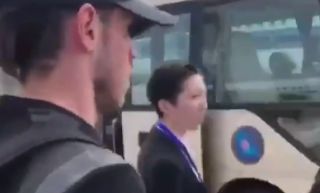 Gareth Bale has been spotted arriving in China to complete his transfer to Jiangsu Suning from Real Madrid.

BBC Sport have been among the sources to report on the Wales international’s imminent switch from La Liga to the Chinese Super League.

Gareth Bale arriving in China, he will earn £1m a week making him the highest paid footballer in the world. pic.twitter.com/uPymUcVz7y

Watch the video above as Bale gets off a plane and looks far from thrilled with life after a disappointing end to his career at the Bernabeu.

The 30-year-old won four Champions League titles in his six years in the Spanish capital, but has failed to establish himself the legendary status he perhaps deserves.

Unfortunately, it now looks as though Bale’s career at the top level of European football is facing a premature end as he sets off for the riches of the Far East.

“I don’t like it, I hope it doesn’t happen” – Liverpool star James Milner fights to save football in superb post-match interview
More Stories Gareth Bale