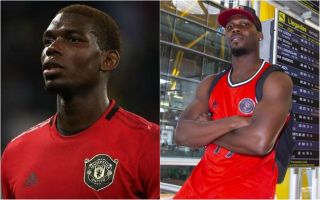 Mathias Pogba, the brother of Manchester United midfielder Paul Pogba, has suggested the player will get his transfer to Real Madrid if he wants it.

The older Pogba sibling, a 28-year-old forward and Guinea international, is himself heading for a transfer to Spain, as reported by AS.

And AS managed to get quotes from Pogba about his brother at Man Utd, who has been linked with Real Madrid by various sources, including the Daily Mirror, who cite three main reasons he’s eager to quit Old Trafford for the Bernabeu.

Discussing the potential Pogba to Madrid move, Mathias commented that he felt the deal could be on the cards if his brother felt it was the right move for him.

“I always want what is best for him. If he feels Real Madrid is the best club for him, then he’ll come,” Pogba told AS.

Paul Pogba continues to be linked with Real Madrid

“I didn’t see the game (against Atletico Madrid) but am aware of the outcome. I feel my brother could assist with any team, if he comes to Madrid, then it will be to help the team.”

This will hardly be encouraging for Red Devils fans who want to see Pogba stay, though the France international has been a divisive figure for much of his time in Manchester.

The 26-year-old has never really displayed the kind of form he’s managed for the French national team or for previous club Juventus, and many fans would gladly do without the distracting headlines he seems to spark away from the pitch.