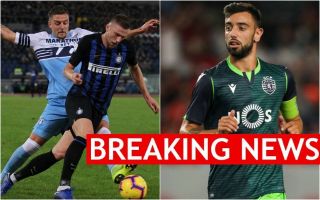 Manchester United are reportedly closing in on two superb midfielder signings in the form of Bruno Fernandes and Sergej Milinkovic-Savic.

The Red Devils have been strongly linked with both the Sporting Lisbon and Lazio stars for much of the summer and it now seems both are edging closer to completing late summer moves to Old Trafford.

Sport links United strongly with both players, claiming Fernandes looks hours away from finalising a deal to join the Red Devils for £63million.

Milinkovic-Savic is also mentioned in Sport’s report, which adds that these two signings indicate Paul Pogba may be heading out of the club.

It’s fair to say both these signings would be expensive to cover a position that United already have covered by Pogba, and it’s hard to imagine Ole Gunnar Solskjaer fitting all three into his side.

Bruno Fernandes could be on his way to Manchester United

All are attack-minded midfielders and teams rarely line up with three so similar in one area of the pitch, with at least one more defensive-minded player needed in there alongside them.

An additional report from Corriere dello Sport, translated by the Metro, states Milinkovic-Savic will cost as much as £90m to sign from Lazio.

MUFC are surely not going to splash that kind of cash on players to just warm the bench.

Sport note that Pogba has been linked with Real Madrid and Juventus, and these two signings surely now mean the France international will be allowed to leave Manchester after a difficult few years.

The 26-year-old is yet to ever really show his best form in a United shirt, and one imagines fans won’t be too bothered about losing a player whose attitude and antics off the pitch have also come into question during his time in the Premier League.