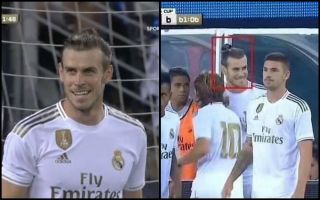 The former Tottenham star was involved in the one-sided hammering, Bale was brought on in what could be his final appearance for Los Blancos on the hour mark. Zinedine Zidane’s side were 6-1 down at the time of Bale’s arrival.

Real’s performance was truly comical, Sergio Ramos gifted Diego Costa a goal for Atletico after a poor attempt to play out from the back. Take a look here.

Diego Costa looked like a prime Diego Maradona as he scored four goals for Atletico before being sent off in true Costa fashion. Take a look at the sending off which sparked a melee here.

Even though the clash was a pre-season friendly, as part of the International Champions Cup, there’s absolutely no excuse for losing 7-3 – least of all to your cross-town rivals.

Bale was pictured laughing and smiling both before and during his introduction to the field.

Whilst on the substitutes bench, Bale must have cracked some joke to get his teammate laughing during a humiliating performance:

Bale might have known something no one else did, he couldn’t contain his excitement has he prepared to enter a one-sided hammering:

Real Madrid were 6-1 down to Atletico after an hour.

Look at the difference in Gareth Bale's reaction to Zidane's… ? pic.twitter.com/zlJumm6II1

To top it off, Bale couldn’t help but crack a smile when his team were 7-1 down whilst he was on the pitch:

Gareth Bale was pictured looking at Zidane on the sidelines and laughing at him. Real Madrid are getting humiliated by Atletico Madrid. pic.twitter.com/R3c8uhFzNi

It’s unlikely that Bale’s antics were a parting shot towards Zinedine Zidane, but this incident says everything about Real’s fall from grace in the last year.

Zidane has treated Bale disrespectfully since his return as Los Blancos boss, the Frenchman made it clear that the wing wizard had no place in his plans for the future, leaving Bale to scramble for a move away from the Spanish capital.

According to The Sun, Bale is on the verge of completing a move to Chinese Super League side Jiangsu Suning, the Welshman will reportedly earn a world-record £1m-a-week when he heads to the Far East.

It was a real shame to see Bale cast aside by Madrid, the former Tottenham star was instrumental in two of Madrid’s recent Champions League triumphs, the Welshman helped Los Blancos to a La Liga title, a Spanish Super Cup, four Champions League titles, three UEFA Super Cups and also four Club World Cups; during his time in the Spanish capital.