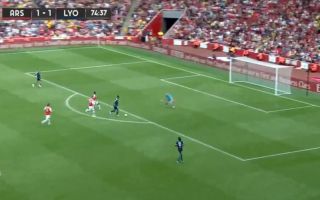 Moussa Dembele has been linked with a potential move to Man United recently, and the Frenchman showed exactly why as he scored a brace for Lyon against Arsenal.

Having gone 1-0 down thanks to a brilliant volley from Pierre-Emerick Aubameyang in the first half, Dembele drew Lyon level after half time, as he guided a great header past Bernd Leno in the Gunners goal.

Dembele then bagged his and Lyon’s second goal shortly after, slotting past Leno after being played through one-on-one.

According to Sky Sports, United will target Dembele as a replacement for Lukaku should the Belgian leave this summer, and we can certainly see why following these strikes.