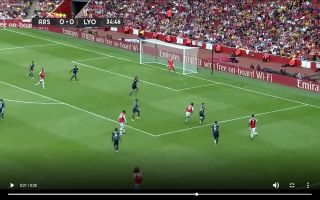 Arsenal superstar Pierre-Emerick Aubameyang has handed the Gunners the lead in their Emirates Cup clash against Lyon with this instinctive finish.

Aubameyang opened the scoring for Unai Emery’s side in the 35th minute of the clash, the Gabon international directed a lovely side-foot volley into the bottom corner of the goal after some impressive work by attacking midfielder Henrikh Mkhitaryan.

Aubameyang will be hoping to get his hands on the Premier League’s Golden Boot once again next season.