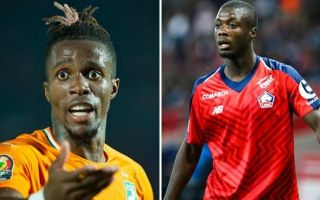 Arsenal reportedly decided to go for the transfer of Lille forward Nicolas Pepe instead of Crystal Palace’s Wilfried Zaha for two main reasons.

One of those was the structure of the fee with Pepe’s club Lille, and the other was down to the personal contract demands of the player himself, according to the Independent.

MORE: An entire XI of Arsenal’s best signings from Ligue 1 as Nicolas Pepe looks set to join the list

It’s certainly hard not to argue that Pepe actually looks like much better value for money than his fellow Ivory Coast international Zaha, having boasted far better numbers for goals and assists last season.

Of course, Zaha has the benefit of being proven at Premier League level, though it is worth noting that, while his form for Palace has been impressive, he flopped in his previous spell at a big six club – Manchester United.

Pepe is also two years younger and seems to have a higher ceiling than his fellow countryman, so Arsenal fans will surely be pleased with this outcome as the deal seemingly edges closer to completion.