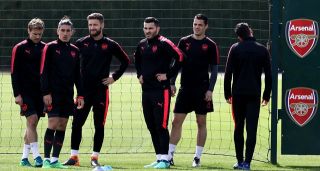 Arsenal defender Shkodran Mustafi has been linked with an exit from the Emirates this summer, but his agent has played down a potential departure.

The 27-year-old joined the Gunners from Valencia in 2016 and has gone on to make over 100 appearances for the club.

However, he has been guilty of countless errors along the way in an Arsenal backline that conceded 51 goals in 38 Premier League games last season.

In turn, Unai Emery will want to shore things up and build a solid platform to ensure his attacking stars can go out and win games, and Goal.com have reported, via L’Equipe, that Monaco made an approach for the German international who is said to be valued at €30m.

“It’s news to me,” his agent and father told Romanews of reported interest from Roma, as quoted by the Metro. “There’s nothing in it. There has been no contact with Roma or any other Italian club.”

While that dismisses talk of a move to Italy, that doesn’t necessarily rule out Monaco, and so it remains to be seen if they make an official bid to try and prise Mustafi away from north London this summer.

Arsenal will have an issue if they sell though, as with Laurent Koscielny refusing to travel on their pre-season tour, as confirmed by the club’s site, that could leave them short in the heart of the defence.

William Saliba was officially unveiled last week but returned to Saint Etienne on loan for the season, and so while the talented youngster will be seen as a long-term solution in that department, the question marks over Koscielny and Mustafi could lead to a more immediate need to bring in defenders before next week’s transfer deadline if they move on.