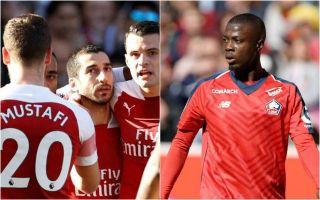 Some Arsenal fans are absolutely thrilled to hear the news of a possible transfer away for flop defender Shkodran Mustafi.

The German has been a major disappointment in his time at Arsenal, having initially looked a promising signing when he joined from Valencia back in the summer of 2016.

A World Cup winner with his country in 2014 and a solid, reliable performer during his time in La Liga, Mustafi has generally been horribly error-prone for most of his Emirates Stadium career.

Luckily, Arsenal fans might not have to put up with him for much longer as he’s linked as a target for Ligue 1 side Monaco by L’Equipe, as translated by Goal.

The 27-year-old may well fare better in a less physical and competitive league, but the main thing for Arsenal is that it could give them added funds to strengthen their defence.

Despite the excitement surrounding what BBC Sport report could be an imminent deal for Lille forward Nicolas Pepe, there’s certainly a need for Unai Emery to improve his defence, and shipping Mustafi could be an ideal start.

These Gooners are certainly happy about the news anyway, with praise coming in for Head of Football Raul Sanllehi…

Sanllehi deserves a pay-rise if Mustafi is sold to Monaco.

Getting 30,000,000 for Mustafi will be a better outcome than Arsenal buying Pepe ?

Look if Arsenal can get £30m for Mustafi, it will be a better transfer news than signing Pepe for £72m

If Jorge Mendes helps us to get rid of Mustafi after acting us our intermediary to sign Pepe, i say we build the man a statue outside the Emirates right next to that of Raul Sanllehi.

if we sign Pepe, Tierney and a CB and get €30m for Mustafi I'll change my avi to Raul Sanllehi til September pic.twitter.com/rOIh2sDpi7

Raul Sanllehi when he gets home after signing Pepe and selling Mustafi for £27m pic.twitter.com/QFPus4vODc