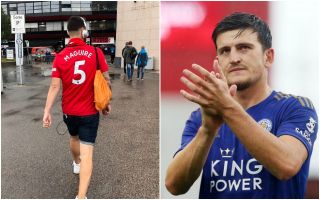 You may well have heard that Manchester United are in for the transfer of Harry Maguire, and have been for what now feels like an eternity.

One potentially key update on the saga came earlier today from the Mail, who claim the potential £80million transfer could be triggered by a string of other deals that would allow Leicester City to replace him with Brighton centre-back Lewis Dunk.

MORE: Manchester United given injury headache ahead of new season

But try telling that to this Man Utd fan, who’s been spotted in Oslo appearing incredibly confident of getting the England international in for the start of the new season.

Landed in Oslo for United vs Kristiansund tonight. This bloke has gone for it. pic.twitter.com/zpEPFiTvWw

Two journalists have spotted this fan with a ‘Maguire 5’ shirt in the Norwegian capital, where Ole Gunnar Solskjaer’s side take on Kristiansund in a friendly later today.