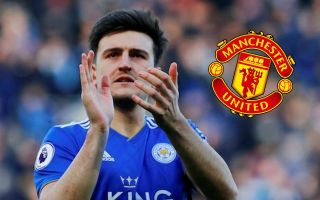 Manchester United have reportedly done most of the work on securing the transfer of Leicester City defender Harry Maguire.

According to the Independent, the feeling inside Old Trafford seems to be that the signing of Maguire should be done before the start of the season and won’t hinge on selling Romelu Lukaku first.

This sounds like an exciting update from a Man Utd point of view, with a centre-back purchase of this calibre looking absolutely essential ahead of the new season.

Maguire has shone at Leicester and for the England national team, and will surely provide a significant upgrade on the likes of Chris Smalling and Phil Jones.

United will no doubt have looked at the impact of big-money signing Vigil van Dijk at Liverpool, with the investment in the Dutchman looking well worth it as the Reds have gone from being a leaky side to one of the most solid defences in Europe, helping them win the Champions League and finish on their best-ever total of 97 points in last season’s Premier League.

MUFC, meanwhile, finished all the way down in sixth last season and conceded 54 goals, so it seems clear where their weaknesses are as the likes of Smalling, Jones and even Eric Bailly and Victor Lindelof have struggled to look good enough for a club of this size.

The Daily Mirror recently claimed it looked likely that United and Leicester could compromise on a £78million transfer fee for Maguire.