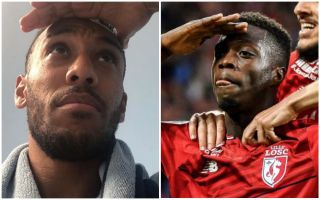 Arsenal striker Pierre-Emerick Aubameyang has posted an image of himself on Instagram appearing to copy Nicolas Pepe’s goal celebration.

The Ivory Coast international is widely expected to be on his way from Lille to Arsenal this summer for a club-record £72million fee, as reported by Goal and others.

Pepe shone in Ligue 1 last season and should prove a fine signing for Arsenal, with Aubameyang perhaps as eager for a confirmation as many of the club’s fans.

See below as the Gabon international seems to hint at the arrival of Pepe, with a number of AFC fans sure his pose is not a coincidence…

Now Aubameyang is joining in the fun. pic.twitter.com/HcwHiaDqcx

There’s no way this is an accident, Auba definitely knows what he’s doing.

It’s nice to see pro players getting caught up in this Pepe deal as much as the fans, it’s an exciting transfer. https://t.co/6nO8e4ZKNx

Lacazette liking posts about Pepe to Arsenal, now Aubameyang posting this on Instagram… players talk. This deal must be done! #afc pic.twitter.com/in0rBIiSfj

Aubameyang on Instagram. Aaaahhhhhh PEPE to the Arsenal ??? pic.twitter.com/HAktc1RN4D