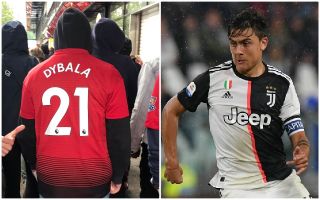 Speculation is rife that Man Utd are chasing the signature of Juventus forward Paulo Dybala, and this fan is seemingly very confident a deal will be done.

As noted by Sky Sports, the Argentine international’s agent is said to be in London for talks with the Red Devils as they look to reach an agreement over a deal which could potentially see Romelu Lukaku move in the opposite direction and join the reigning Serie A champions.

SEE MORE: Agent of €100m-rated star in England to discuss personal terms with Man Utd ahead of possible swap deal

Time will tell if the deal materialises as there is no suggestion that there is an agreement either between the two clubs or with the player on personal terms as of yet, but with the transfer deadline fast approaching next week, Ole Gunnar Solskjaer will want business wrapped up sooner rather than later.

There’s no stopping this fan though, as he’s gone and got Dybala printed on the back of his United shirt in anticipation of the move happening, perhaps given previous speculation as the shirt doesn’t appear to be this season’s edition.

For his sake, we hope it goes through as that could end up being quite a bit of money wasted, but judging from the report above, the situation is certainly moving in a favourable direction as far as Man Utd are concerned.

Given his influence since joining Juve coupled with his winning mentality and the technical quality and creativity he could bring to the final third at Old Trafford to complement the pace and movement of the likes of Marcus Rashford and Anthony Martial, it could be an excellent move from the Red Devils.

However, if Dybala does arrive, he won’t be able to claim the No.21 as actual summer signing Daniel James has already bagged it.

In Norway we have a term and it’s «overtenning». Please Google it.. @Zerener does, however, (ironically), approve this guy’s Dybala Man United shirt pic.twitter.com/rrv2vrQjUR