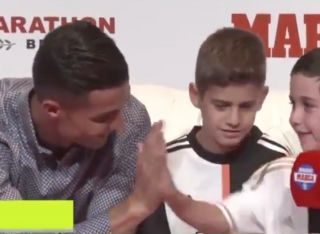 Cristiano Ronaldo was back in Madrid on Monday as he collected the Marca Legend award, and one Real Madrid fan conceded he was gutted to see him leave.

The Portuguese superstar swapped the Spanish capital for Juventus last summer, guiding the Turin giants to another Serie A title, although they did fall short in the Champions League.

However, after a glittering spell at the Bernabeu, Los Blancos struggled without their talisman last year as they ended up empty-handed and re-appointed Zinedine Zidane to try and get them back to their previous level.

Ronaldo was put on the spot by a young fan though during the event, as seen in the video below, as he told him that he was sad to see him leave Real Madrid.

The 34-year-old revealed he was too as he tried to lighten the mood, giving the young man in question a high-five to try and cheer him up.

With the likes of Eden Hazard and Luka Jovic arriving this summer, the youngster will hopefully have new heroes to watch to ensure there are more successful times ahead for the Spanish giants without Ronaldo leading their charge.