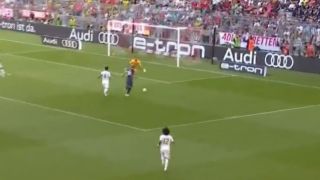 Tottenham striker Harry Kane has scored the opening goal in a pre-season clash against Real Madrid on Tuesday afternoon.

The two sides are meeting in the Audi Cup at the Allianz Arena, with a place in the final up for grabs against either Bayern Munich or Fenerbahce, who play against each other tomorrow.

Spurs made the perfect start to the match after an embarrassing error from Marcelo, which allowed Kane to nip into the box and finish superbly past the onrushing Keylor Navas.

The Madrid defender played a risky backpass when trying to keep the ball in play on the far right side of the pitch and Kane capitalised on the mistake to put Tottenham ahead after just 22 minutes.

Check out the England striker’s superb finish below, via Twitter.

Spurs skipper Harry Kane pounces on a Marcelo mistake to break the deadlock and put Tottenham Hotspur ahead against Real Madrid.#THFC #COYS #AudiCup2019pic.twitter.com/sBDkZyIp2y

Gift from Marcelo and goal by Harry Kane in #AudiCup. pic.twitter.com/fs7813ff4C