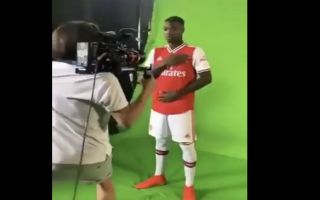 A video of Nicolas Pepe wearing Arsenal’s kit and patting the club’s badge has surfaced online, as his move from Lille nears completion.

According to BBC Sport, the Gunners have successfully negotiated a club record £72 million deal to bring the Ivory Coast winger to Emirates Stadium, on a five-year contract.

The 24-year-old arrived in London for a medical on Tuesday and with an official announcement now imminent, a leaked clip of Pepe wearing Arsenal’s kit suggests a transfer has definitely been finalised.

Standing in front of a green screen with a camera pointed at him, Pepe can be seen standing in the Gunners’ new home kit while patting the crest on the top right-hand side, to pledge loyalty to his new club.

Arsenal have acquired one of Europe’s brightest young talents in Pepe and supporters will soon be able to witness his talent up close as he embarks on the next chapter of his career at the Emirates.

Leaked video of Nicolas Pepe tapping the Arsenal badge during his media photos after signing for the club today. #afc pic.twitter.com/eNxZKGlG8E

We’ve done it. Nicolas Pepe is officially a Gunner. pic.twitter.com/6CTH6YHOE1