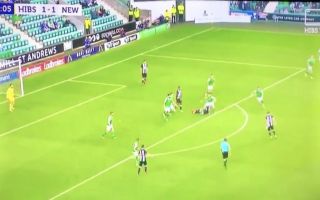 Sean Longstaff has justified rumours linking him with a move to Manchester United by scoring a superb goal against Hibernian for Newcastle.

According to Metro Sport, the Red Devils are preparing a £30 million offer for the 21-year-old, having been impressed by his performances for the Magpies last season.

The English midfielder made nine Premier League appearances for Newcastle after making a breakthrough at the start of the year but an injury cut short his 2018-19 campaign in March.

Longstaff is fully fit and raring to go ahead of the new season though and he showed exactly why he’s a target for United by scoring a fantastic 20-yard thunderbolt against Hibs on Tuesday night.

The young playmaker picked up the ball on the edge of the box and set himself before firing the ball into the bottom left-hand corner, putting Newcastle 2-1 up in the pre-season clash.