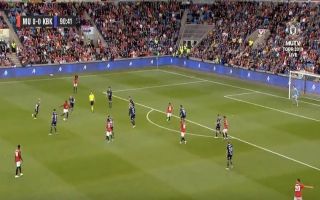 Manchester United midfielder Paul Pogba set up Juan Mata perfectly to set the stage for a dramatic victory over Kristiansund on Tuesday.

The Red Devils won 1-0 in Oslo against the Norwegian outfit thanks to a last gasp Mata penalty, which maintained the team’s 100% record in pre-season.

Ole Gunnar Solskjaer’s side struggled to carve out clear openings against Kristiansund, but their stubborn defence was finally breached at the death thanks to a moment of magic from Pogba.

The Frenchman’s incredible defence-splitting pass found Mata in the box, who skipped past the goalkeeper before being felled which forced the referee to point to the spot.

The Spaniard converted his penalty expertly, but a lot of the plaudits will also go to Pogba for his creative genius in the final third of the pitch.

Check out the World Cup winner’s pass and Mata’s penalty below, via Twitter.

what a pass from pogba ??#mufc pic.twitter.com/Q1xI3HtNSd

This pass from Paul Pogba is absolutely ridiculous. He makes it look too easy, this is such a difficult pass to make. ??? pic.twitter.com/zllkKny1oi