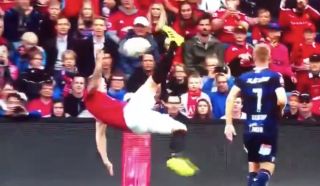 Manchester United defender Phil Jones tried to score an overhead kick in a pre-season clash against Kristiansund, with embarrassing results.

The Red Devils are in Oslo for the penultimate game of their pre-season campaign against the Norwegian outfit, and the scores are locked at 0-0 heading in at the break.

Ole Gunnar Solskjaer’s men have won their previous four games of the summer, against Perth Glory, Leeds, Inter and Tottenham, but chances have been few and far between against Kristiansund on Tuesday.

Jones saw the chance to grab some headlines when the ball came flying his way in the opposition box, but his horribly mistimed effort ended up leading to a handball.

The English centre-back’s hilarious overhead kick attempt deflected off his hand and out of play, much to the amazement of the United faithful watching on from the stands.

Check out Jones trying to score an outrageous volley below, via Twitter.