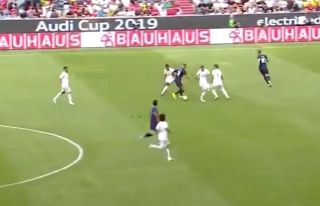 Tottenham winger Eric Lamela showed off his superb dribbling ability during a 1-0 win over Real Madrid in the Audi Cup on Tuesday.

The two teams met at the Allianz Arena in a pre-season clash earlier today, with Spurs securing a narrow victory thanks to a first-half goal from Kane.

The England striker very nearly added a second shortly after opening the scoring, but he failed to find a way past Keylor Navas in the Madrid net after great work from Lamela.

The Argentine took on the entire Real Madrid defence before setting up Kane with a superb pass, having started his run from the bottom end of the pitch.

Check out Lamela in full flow below, via Twitter.

The moment lamela took on everyone and your nan pic.twitter.com/dDvWB4Bnjv

This is moment Tottenham Hotspur midfielder Erik Lamela decides to take on the whole of the Real Madrid team … ??