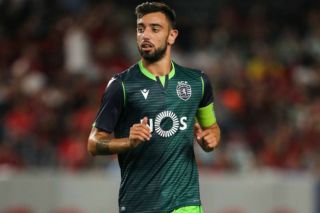 A spokesperson at Sporting Lisbon has spoken out on the Bruno Fernandes Manchester United transfer rumours as reports had emerged claiming a deal was close.

Reliable source Gianluca Di Marzio yesterday claimed that there seemed to have been a breakthrough in the Fernandes deal after lengthy speculation linking the Portugal international with a move to Old Trafford.

While it makes sense that Man Utd are being linked with a quality midfielder who’d be an obvious upgrade for them in that area of the pitch, it seems reports may once again have been a tad premature.

A Sporting official has been quoted by Portuguese outlet RTP as saying these rumours are “completely false”, so it seems like it’s as you were for United.

MUFC supporters will surely be eager for some more positive developments on this potential deal in the coming days as time is running out for Premier League clubs to bring players in.

United finished sixth last season and, as things stand, have barely strengthened that same squad that struggled so much.

Only youngsters Aaron Wan-Bissaka and Daniel James have come in so far, and more additions of proven players like Fernandes will surely be required to lift Ole Gunnar Solskjaer’s side back into contention for the top four and for major trophies.