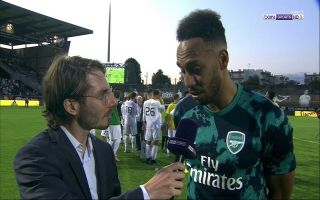 Aubameyang spoke about Arsenal’s rumoured move for Lille star Nicolas Pepe after the Gunners’ 1-1 draw with French side Angers in today’s pre-season friendly.

Aubameyang described the star as a ‘great player’ before admitting that he hopes that the star’s signature is confirmed ‘quickly’.

According to BBC Sport, Arsenal have agreed a club record £72m (€80m) deal with Lille to bring the Ivorian to the Emirates Stadium, it’s claimed that the versatile attacker will sign a five-year contract with the Gunners.

Aubameyang’s public statement about Pepe comes just a day after a leaked video showed the Lille star posing in a new Arsenal kit in front of a green screen. An announcement on the deal could be imminent.

Take a look at what Aubameyang had to say on Arsenal’s expected new signing below:

Pierre-Emerick Aubameyang on Nicolas Pepe: “When there are great players like that who are close to sign with a great club like Arsenal, it is very pleasant to have a player like that & I hope that he signs quickly & that it gets done. We are waiting!” #afc pic.twitter.com/3dC9i1RViP

Here’s how some Arsenal fans reacted to their star striker’s exciting admission:

When will he get announced We are also waiting Auba

Pepe was arguably one of the  best attackers in Europe last season, the 24-year-old scored 22 league goals and provided 11 assists as he inspired Lille to a surprise second-placed finish in Ligue 1 last time out.

Arsenal’s attack would become one of the league’s best with the signing of Pepe. The Ivorian would partner the deadly strike duo of Alexandre Lacazette and Aubameyang.

Aubameyang got his hands on the Premier League’s Golden Boot last season and the Gabon star will be hoping that Pepe’s arrival can help take his performances to the next level.

Pepe showed last season that his impressive performances rubbed off on his teammates, the likes of Jonathan Bamba and Rafael Leao established themselves as some of Ligue 1’s top attacker with the help of the 24-year-old.

Unai Emery should target the signing of a world class wide player this summer, academy graduates Alex Iwobi and Reiss Nelson are the club’s only natural wingers with first-team experience.

In other Pepe-related news take a look at this deep dive from one of our writers which reveals how the Ivorian’s move to north London could cost a total of £95m.